Posted on December 10, 2013 by JessicaCampbell

Busking or street performing has been around since the earliest recordings of history. Where musicians, artists, dramatics or pretty much anyone with an interesting skit or personality can display their talents for all to see and collect change courtesies from the public.

Throughout history, it was common to see buskers or street performers referred to as Gypsies or Romani people and were considered lower class. However, these days just because one plays music on the street does not classify them as lower class. But, could simply mean that their talent or show is their passion.

Garrick Tyas first began busking in Hamilton Ont. as a means of getting through life.

“After a little more than 25 years of busking now I know the rules; I know what I am doing, and I know what is not to be done,” Tyas added.

“I was left kind of penniless on the streets of Hamilton with my pregnant wife. So, the only thing I could really think to do is busk.”

“I was left kind of penniless on the streets of Hamilton with my pregnant wife. So, the only thing I could really think to do is busk,” said Tyas who hasn’t stopped busking since.

After being in an accident on the Don Valley Parkway, his insurance settlement allowed him to purchase his first violin, for his daughters.

“The violin didn’t take with them, it did with me!” said Tyas.

Tyas is known to the Belleville area as ‘The Fiddle Guy’ and has formed himself a reputation as a friendly and talented face that locals expect to see outside of Metro located on North Front St.

“They haven’t kicked me out yet, so I must be doing something right,” said Tyas.

Although some may think it’s as simple as grabbing your instrument and heading down to a local storefront, there’s more to busking than meets the eye.

Initially buskers are required to have a busking license and in addition the business or storefront must give the individual full consent to perform outside of their location. 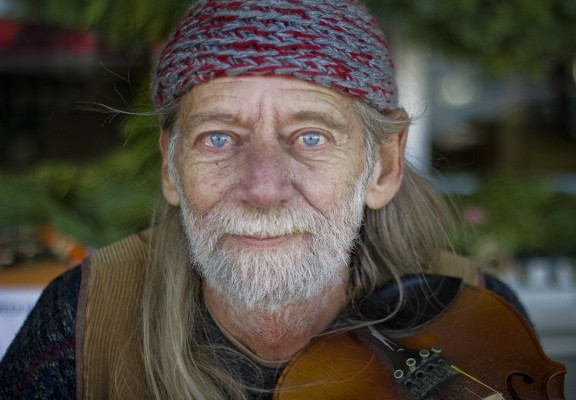 “It’s a mutually good thing, its not a given, you can’t go on any property and busk anymore,” said Tyas.

As shoppers young and old approach Metro’s front entrance, it is clear that Tyas face is one that individuals in the community recognize.

“It gives me recognition in this community that nothing else would have,” said Tyas. He has made acquaintances with a variety of individuals ranging from employees to regular shoppers while busking outside of Metro.

“It gives me recognition in this community that nothing else would have.”

“I look out for their territory; I look out for Metro’s property as best I can. I feel like their parking lot is a lot safer because my eyes are there looking out for it, and I think they understand that,” said Tyas.