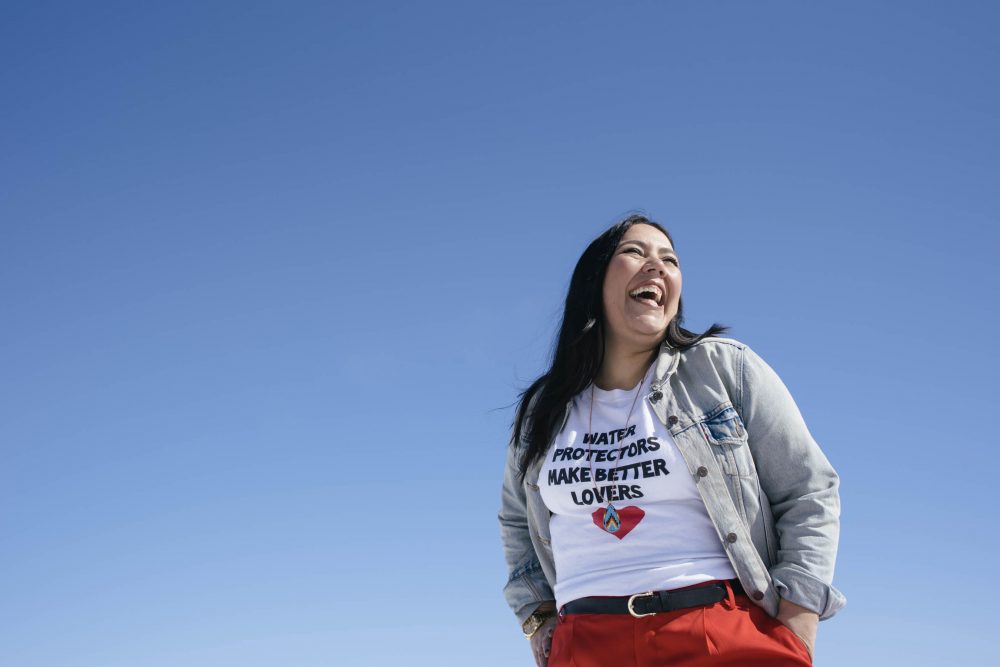 GATINEAU, Que. (28/02/19) — Sunshine Tenasco is Anishinabe from Kitigan Zibi Anishinabeg in Quebec. She is an entrepreneur, mother and water activist. She started Her Braids to raise awareness of the lack of clean drinking water in First Nations communities within Canada. Her own community has been without drinking water for 15 years. She also created Pow Wow Pitch, which in simple terms is Dragons Den for Indigenous businesses to create a space where Indigenous entrepreneurs felt a sense of belonging and support to fuel their entrepreneurship. Photo by Shelby Lisk.

Shelby Lisk is a multimedia journalist from Kenhté:ke (Tyendinaga Mohawk Territory, in Ontario). She is currently working as the Indigenous Hub Reporter for TVO, where she covers Indigenous issues and current affairs from across the province for TVO.org and The Agenda. As a part of her position, she also sits as the TVO Journalist in Residence in the school of journalism and communications at Carleton University. Through this position, she engages with students about reporting in Indigenous communities.

Prior to attending Loyalist College, she completed her degree in fine rts, with a minor in gender studies at the University of Ottawa (2015). While at Loyalist, she started a part-time certificate in Mohawk Language and Culture through Queen’s University and Tsi Tyónnheht Onkwawén:na, which she will complete this spring. She had the pleasure to be a part of the launch of a new initiative at TVO to translate articles into Indigenous languages.

Before starting her role with TVO, Shelby did internships with the Globe and Mail, APTN and with Loyalist advisory board member and alumna, Anne-Marie Jackson. Her writing and photography have been published in Red Rising Magazine, The Globe and Mail, APTN news, TVO.org, Watershed Magazine, In/words Magazine and “#NotYourPrincess: Voices of Native American Women.”

Looking back on my experience, the thing that stands out most for me is that studying photojournalism put me in so many new and unfamiliar situations. I went into college wanting to learn more about my Indigenous roots through telling stories with my community. I knew where I wanted to go and I didn’t take my eyes off it. If it weren’t for this program, there are so many people I wouldn’t have met, things I wouldn’t have learned and experiences I would have never believe I would be a part of. Journalism can be tough but if you know that’s where you want to be, this program and these teachers will help you get there. During my time at Loyalist, the teachers in this department believed in me while also pushing me way out of my comfort zone consistently. They care immensely about their students’success and create a community that exists beyond the walls of Loyalist College and into newsrooms around this country and beyond. I haven’t met a single Loyalist photo-j grad that didn’t have the time to chat with me about their experience, offer advice or help make connections. It’s like a little secret club that you definitely want to be a part of.

This entry was posted in Thirty +. Bookmark the permalink.