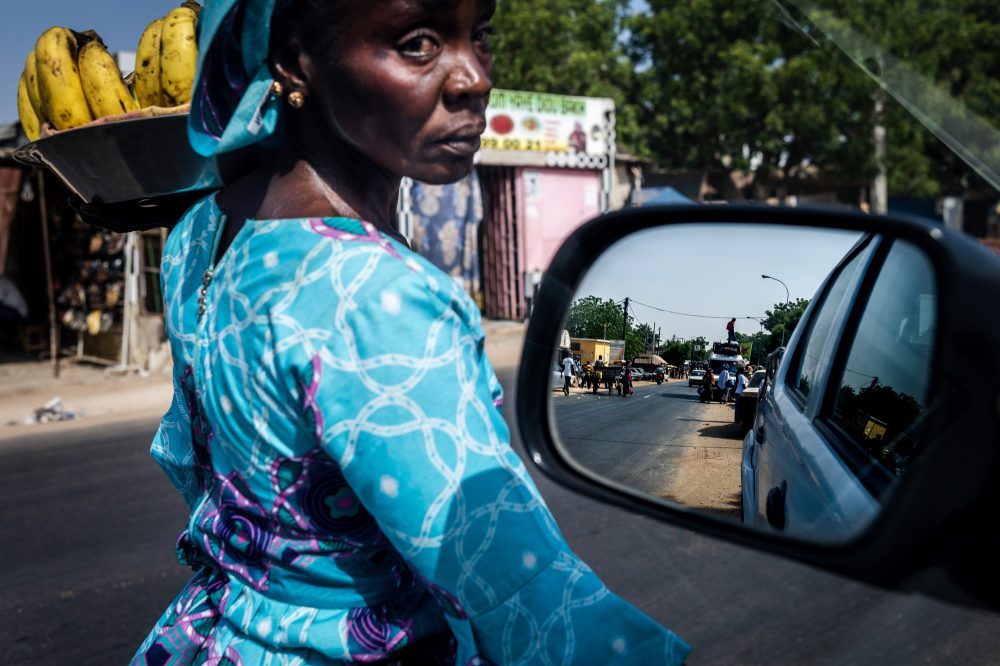 NGAYE, Senegal – 12/11/2019 – Reflected, a man stands on top of a bus in the middle of a market scene as a woman walks by in Ngaye, Senegal on Nov. 11, 2019. The town of Ngaye, some 170 km out of Dakar, specializes in all forms of leather works. They sell anything babouches, artisanal shoes, belts and other leather items. It is referred to as the town of leather. Our driver explained that the belt he bought there eight years ago still lasts. People from Dakar go to Ngaye to buy the leather goods and resell them. The town has earned its reputation for quality. Photo by Andrej Ivanov

Andrej Ivanov is a freelance photographer currently based in Montreal, but has lived in Kitchener, Belleville, Toronto and Belgrade, Serbia. He graduated from Loyalist College Photojournalism in 2019. He has worked as an intern at the Waterloo Region Record and has had the chance to produce several photo essays on housing, addiction, mental health and reconciliation. However, he is also very interested in LGBTQ+ rights and post-conflict reconciliation. Before coming to Loyalist, he had obtained a Bachelor’s degree in psychology from Concordia and has partially completed his journalism studies in Montreal and Toronto. His work has been recognized by the Canadian University Press, the News Photographer’s Association of Canada and the Northern Short Course, all of which awarded him the Student Photographer of the Year. He also received a silver medal in the Interpretive Eye category in COPY 2019. He has recently participated in the Eddie Adams Workshop XXXII, as well as had his first show at the Zoom Photo Festival.

At the time of writing this, he is in Dakar, Senegal working with CECI, a Canadian NGO focused on women and youth development around the world. He also works with the Globe & Mail, Reuters, Macleans and other publications. His works have been published worldwide, including the New York Times, Paris Match, Le Monde, Courier International, Bloomberg, El Pais, Al Jazeera, and, his personal favourite, the Fiji Times. He intends to pursue his career working with NGOs and other international clients.

I would like to preface that I actually didn’t go to Loyalist the first time I visited. I moved to Toronto instead, even though I had been accepted. After quite a bit of soul searching, I went back down the 401 to Belleville and started again. It’s hard to explain what it was that clicked; at which point the paradigm shifted. But in two years, it happened. Maybe it was the countless hours I spent talking to Frank, Patti, Scott, and Dan. Maybe it was Doc class in third semester. Maybe it was all of the trips I took over my time at Loyalist. Really, it was probably all of it. I think, for me, the best part of my time was that I didn’t allow myself a lot of distractions. I just went out and shot, looked for stories, did assignment work and allowed myself to grow. I spoke with Marta Iwanek before coming there and she told me it was an incubator. It really is. The process may never make sense, but there is something magical that happens inside and outside those walls that makes great photographers come out. The moment I saw my own growth was when I started building portfolios for the contest circuit. Looking through my submissions over the years, I had a chance to stop and realize what I had accomplished in a very short period of time. Those are two years I needed and that I will never regret. Thank you Frank, Patti, Scott, Dan and Linda. To anyone reading this, remember: “Do the best you can in the time allotted” and “trust the process.” And be kind.

This entry was posted in Thirty + and tagged Andrej Ivanov, Loyalist College, Photojournalism. Bookmark the permalink.