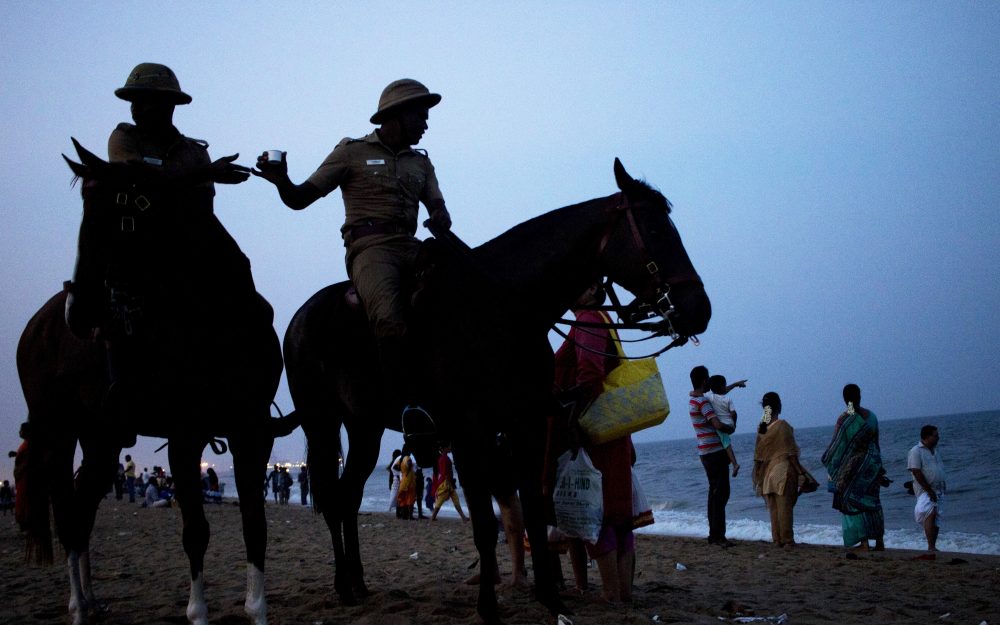 Chennai, India — 8/04/2017 — One of the main duties of the Mounted Police in Chennai, Tamil Nadu is to make sure people don’t venture too deep into the Bay of Bengal as the currents are really strong. This photo is part of a photo feature “A day in the life of the Mounted Police.” (Photo by Aman Parhar)

Aman Parhar is the Editor for Black Press Media and is currently based in Vanderhoof, British Columbia, where she is writing, editing and laying out three community newspapers every week.

From India originally, she moved to Canada in 2015 to study Photojournalism at Loyalist College. She has lived in Ontario, New Brunswick and now British Columbia. She has worked as a freelance videographer and photographer, digital marketing strategist and reporter before she took up the role of an editor. Before coming to Loyalist, she did a university degree in Journalism and worked for Teach for India, where she worked as a teacher to provide education to children living in bad socio-economic conditions.

I don’t think I can be succinct when it comes to my experience at Loyalist.

I was an international student, who chanced upon a Loyalist College booth at a “Study in Canada” fair in my hometown, Chandigarh (India). My father had forced me to check this fair out to study abroad, and I went along because I knew I would get good coffee there.

An hour or two into the fair, I had an opening to apply for the Photojournalism course. The representative from Loyalist, Alistair, was stoked that I was interested in the program, as I had the necessary education to go with it.

And two weeks later, I was accepted into the Photojournalism program.

I had never travelled abroad, and was really excited about the new experience. But was a little unsure, because I had just taken a very spontaneous decision.

I remember the first day I was at Loyalist. I met Frank, Patti and Scott. They took me in and made me feel like I belonged.

And when classes started, it was tough work, but the projects we were given pushed us to think and create. They gave us the stepping stones needed to be successful.

I am forever grateful to Frank, Patti, Scott and Dan for their hard work. And to Linda, for her warmth, patience and amazing cookies when we would be working WAY too close to deadlines for the Pioneer edition.

I have spent countless hours speaking with all of them, about stories I was interested in doing, life goals, and more. They are such good listeners. And they were my first family in Canada. Without their effort and support, I definitely would not be where I am today.